Eventing is up to you to implement any way you like.  You need to be able to broadcast ‘events’ which cause methods to be run on an arbitrary number of observers.  The broadcaster is ignorant of the exact identity of the observers.  Its the observer pattern.

I recommend a lightweight synchronous, eventing system / observer pattern that is based on method calling on objects.  It

In the following example, observers is a variable of type ‘multicast’.

Dependency Injection - one to one, one to many

When you wire up your objects to point to each other you are doing dependency injection - as long as the objects are not instantiating instances of the objects they are pointing to themselves, and the injection is done from ‘outside’. The objects being injected are thus depending on an abstraction or interface - which is injected later.

Similarly, when you wire up the observers of an object, by adding them repeatedly using += to a list in a multicast variable, you are also doing dependency injection, except with a multicast flavour.

Its all just wiring.  Its just that some wires are one-to-one and others are one-to-many.

This leads to another insight.  Eventing is just method calling.  Objective C I think sees the world in this way.  And Ruby.  Possibly this is obvious to some people and some languages, but when you do eventing this sort of lightweight multicast technique, it becomes much more obvious.

If you adopt an meaningful name and perhaps an uppercase naming convention on method names which are being called in an event style, then it becomes even more obvious e.g.

When a method is in uppercase, it looks more like an event, to me.  So that’s why I do it.  When I see a method in upper case I know that it is being called as part of an observer eventing pattern call.  In other words calling methods in this way, this IS the way you broadcast events.

It nice that eventing and method calling become the same thing because you don’t have to learn anything new.  You can pass information in parameters just as you would with a method call.

Its all just method invocation, which is all just eventing - and vice versa - in a sense.  As long as its all hooked up using the principles of dependency injection, which insists on depending only on abstractions/interfaces.

Its a neat symmetry that lightweight eventing, dependency injection and adapters satisfying interfaces all work together within the HexMvc framework.  The high level architectural concepts and the low level implementation idioms are similar, forming a powerful, cohesive, interrelated yet simple architecture.

In the end, whether an event object is being created and passed to an eventing framework - or whether a piece of code has the knowledge to call a particular method - its all ‘knowledge’ and thus a ‘dependency’.  Knowing what sort of event to raise or register is no less coupled than simply knowing what method to call.

This argument assumes that you have sufficiently decoupled things by using interfaces and abstractions.  For example, some degree of decoupling occurs when you call methods via eventing, since the caller/raiser doesn’t know what particular objects are ultimately being called.  The same level of loose coupling can also be achieved with ‘mere’ method calls, as long as the object whose method you are calling has been abstractly injected, so that the caller has no idea who is implementing that interface.

The benefit of a multicast method calling approach over an eventing approach is that it is simpler and avoids too much syntax, declaration, duplication and registration etc.  If you already have a nice eventing system and are happy with it, then by all means use it.

Functions instead of objects

Whilst lists of functions are usable in some situations, I haven’t really thought about eventing in HexMvc using functions only - because it seems to me that functions only give you one shot at calling a method, whilst having a list of objects that implement an interface, gives you an unlimited set of methods you can call on those objects.

This sort of eventing will probably work ok in C# and other .net languages too, using delegates - though there will be the usual type declaration dance needed.  And note that I am assuming the multicast object points to a list of objects, not functions - not sure if this is possible in .net delegates?

A synchronous call from view to controller to model, and an immediate calling chain back again in order to construct an immediate response object - this is web mvc.  A partial downside of this approach is that the model doesn’t get a chance to broadcast updates to other sub-systems of the app. If we allow the opportunity for the model to broadcast a message, then other sub-systems like GUI views (not web view related) can update with information.  In other words, a controller setting info on a model silently is a bit limiting - a controller that sets info on a model via a model adapter will trigger other update notifications, which can be a good thing.

All based on synchronous calls - even if it looks like eventing.  Not addressing asynchronous, except in the limited context of server threading.

A bit of history on Observer based Eventing

This is a bit of a tangent, and may form part of another talk.

With the regular observer pattern, you have a ‘subject’ object which contains a list of observer objects. The subject then loops and calls a particular method on all these observer objects when a notification is required.  That’s the basic idea. You can pass paramters in the notification call, incl. strings to tell the observers of different actions to take.  Optionally add some type safety if you like, to ensure both observer and  and ensure both observers follow some interface (to ensure the observers have a OnNotify() method and to ensure subjects have an AddObserver(o) method etc.  Optionally even add some functionality in a subject base class so that your looping NotifyAll() method only has to be implemented once. 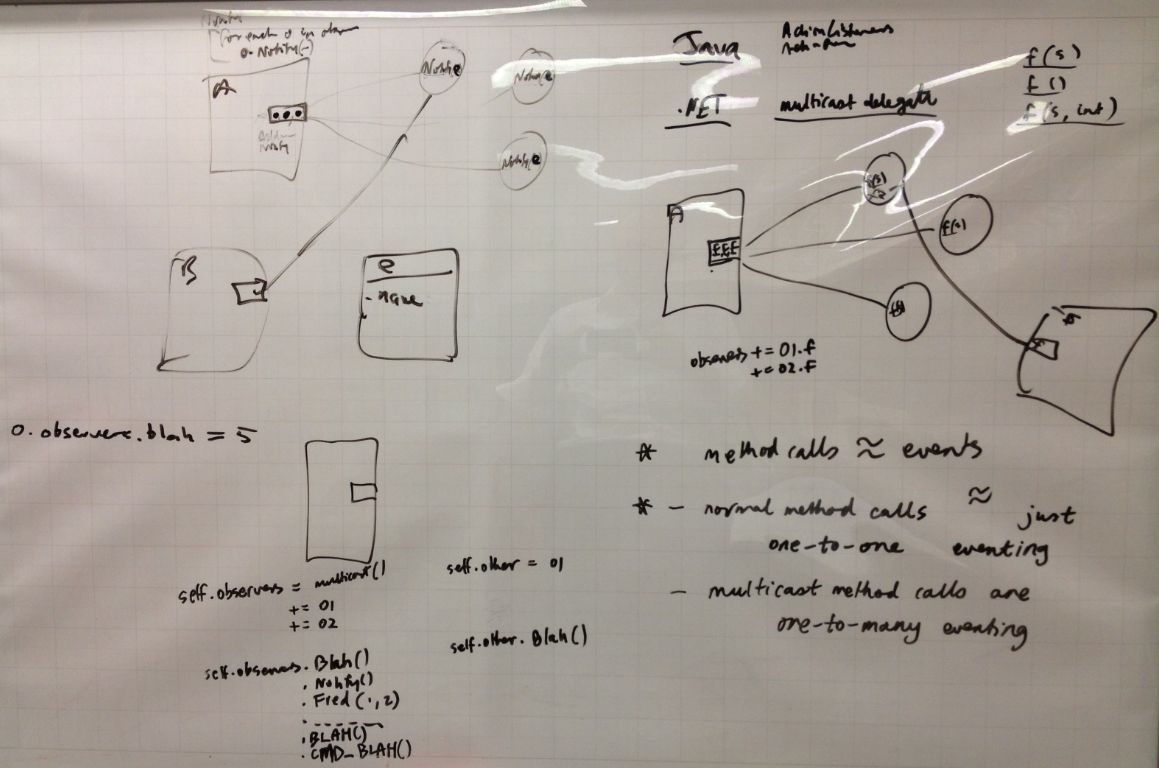 Java’s ActionListener with their ActionPerformed methods is essentially the Observer pattern, built into the language/libraries.  It might be a bit cumbersome for normal usage in your app - being very GUI widget centric, but the essential point I want to make is that observers are lists of objects not functions.

C# and .NET introduced the idea of observer pattern broadcasting using multicast delegates, which are lists of typed functions.  A benefit of this approach is that it doesn’t matter what the observer’s class is or what interface an observer implements - all that matters is that the functions which are added to a subject’s observers list follow the same method signature.  The list of oservers is a multicast delegate object, also pretty much the same thing as an event.  Thus observers hook into some subject’s event in this way.

A possbile downside (or upside, depending on your point of view) of moving from lists of objects to lists of functions is that if there are 10 events you need 10 events on the subject, and 10 functions on each observer.  With the regular observer pattern, you need only have one subscription by an observer, then the observer has to figure out what out of the 10 things happened, usually by a string passed as a parameter e.g. observer.Notify(what) and then an if-then-else statement to perform the relevant code.

Birger’s thoughts on ‘multicast’ in .NET

I sent an email to my colleague Birger who is an expert in .NET

I’m wondering if I could ask you a .NET question that would add some colour to my talk next week. I’ll be talking about observer pattern and possibly mentioning using .NET events / multicast delegates. Is there something in .NET that allows for lists of OBJECTS (not functions) to be += to some sort of delegate object so that I can invoke a variety of different functions on that list of objects?

Im looking for something built into .NET that would work like my python example below where ‘observers’  is a variable of type ‘multicast’ and holds a list of OBJECTS.

Thanks for any thoughts,

There’s nothing like you describe built-in that I can think of. The preferred way is to use delegates, at least in UI code. However, I can think of three or four things you may want to consider…

Hope my thoughts can help with your presentation.

I contend that the python multicast class is another even better way to do eventing.

This multicast object technique is not a feature of python but can be done in any dynamic language e.g. Ruby.

In the following example, observers is a variable of type ‘multicast’.

In this implementation the subject has a list of objects - so its more a traditional observer pattern implemnentation.  What makes it unique is that the looping/broadcasting code is built into the multicast object, so there is no need to worry about subject base classes or subject interfaces.  All you do is create a multicast object as a variable/property of your class and you are good to go.

The other benefit of this implementation is that observers simply add themselves to the multicast object and the calls into the observer happen as normal method calls.  If you call observers.FRED() then all observers which have a method FRED() will have that method called.  You can have any number of method calls, and this doesn’t have to be agreed upon in advance with interfaces etc - though you could add that layer of type safety if you really insisited.

Also the method calls can take parameters.  Eventing just becomes method calling - same technology, same techniques - nothing new to learn.  If your observer doesn’t declare a particular method then it will be silently skipped (depending on the nuances of your implementation, you could change this default behaviour).

Notice that when we have a normal reference to an object e.g. self.other = o1 you perform a method call on that other object with the usual self.other.Blah().

What this means is that

the core of which is:

Invoke method attributes and return results through another multicast